Wisconsinites went to the polls on Tuesday In droves. The final results of the election though do not fully reflect the will of the people.

There were five statewide races: Governor (with Lt. Gov on the same ticket), US Senator, Attorney General, Treasurer and Secretary of State. Democrats won all five races. This is the first time that’s happened since 1982. ​

Dems had unmistakable victories at the statewide level. As you look down the ballot though, the results tell a very different story.

Wisconsin has eight Congressional seats all of which were up for election on Tuesday. Going into Election Day, Democrats controlled three of them and Republicans the remaining five. No seat flipped.

[These numbers have been updated since original posting, as additional totals have been tallied and reported. See most up-to-date vote breakdown here.]

And yet, as mentioned, Dems got three out of eight seats.

When we look at the State Assembly, which had every seat up for grabs this past Tuesday, that disparity becomes even more glaring.

And yet Democrats walked away with only 36 seats, while Republicans took a staggering 63!​

That means that Democrats won 54% of the vote and yet took only 36% of the seats. 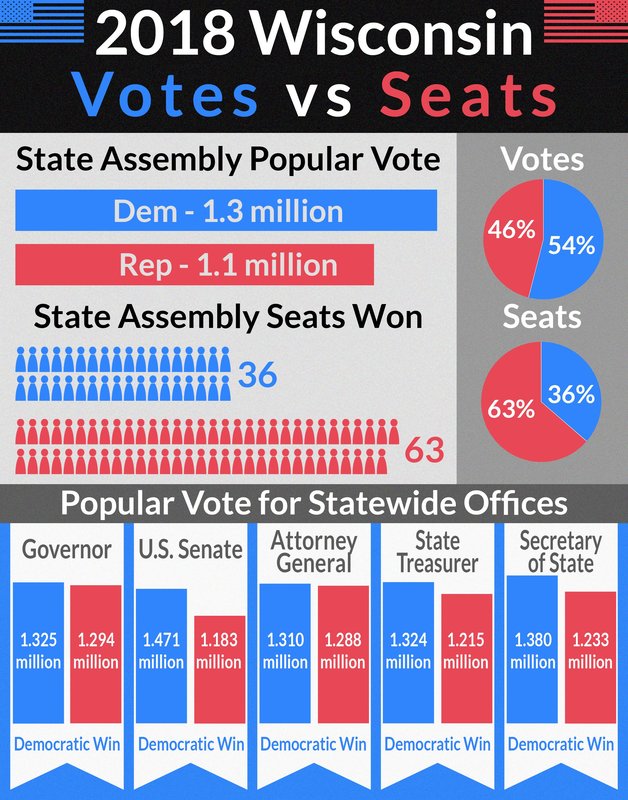 A Flimsy Response to a Gerrymandered Map

Speaker Vos is essentially arguing that Wisconsin should not have a popular vote (or popular representation), but rather that we need our very own electoral college to protect Wisconsin from its two largest cities.

But of course how a city votes is irrelevant (or should be!). It should be how the people vote. And his explanation doesn’t even come close to explaining the clear disparities at play. Of course Madison and Milwaukee have a large role in deciding our state’s leadership. The combined population of their two metro areas makes up over a third of the state’s population. That’s simply how representative democracy works. Or how it’s supposed to anyway.

Remember that the next time our minority-elected legislative government aims to make sweeping changes to our state — changes like curbing the authority of our newly-elected Governor, because a powerful Executive was good for Vos and Senate Majority Leader Fitzgerald when that Executive was a Republican, but is a threat to their minority-rule now that he’s a Democrat.

Republicans couldn’t draw the statewide map to their benefit and every statewide race went to a Democrat. Despite winning sizable majorities in the popular vote for both Congress and the State Assembly, Democrats continue to find themselves in the minority of both bodies (for Congress, this only relates to the Wisconsin caucus, not the national map).

Work in politics? Want to?

Build Your Photo/Media Library Seamlessly with Shared iCloud DrivesStep Up Your Social Ep. 1: Crossposting vs. Autoposting
Scroll to top