Kevin Nicholson is running in the Republican primary to take on Wisconsin Governor Tony Evers in November.

In 2018 he ran in the Republican primary to take on Wisconsin Senator Tammy Baldwin.

But he’s running for higher office in my home state of Wisconsin – so of course I’m on his email list. (It’s part of my civic duty as a Wisconsin Digital Strategist to pay attention to such things!)

His emails are boring. Run-of-the-mill copy-and-paste jobs screaming about the world ending and asking for $5 so he can fix it all. There are lots of big red buttons and 24 point fonts. Sign up for a dozen or so statewide Republican email programs and you can pretty much mix-and-match them amongst each other, just swapping names and logos.

But… because I’m a huge digital and political nerd, I like to track my emails as they work their way through an ever-widening group of shady characters. That’s right <<<GASP>>> lots of political campaigns sell their email lists to the highest bidder.

Scott Walker used the massive email list he built up throughout his thwarted Presidential campaign to help pay off his campaign debt. (You might recall he raised — and spent — a ton of money on his campaign, only to drop out before the Iowa primary.)

He sold that sucker to anyone — and everyone — with money to burn.

So yeah, for better or worse (and it’s definitely for worse) it’s common practice in politics to sell, rent and trade emails these days.

“Selling or swapping your campaign’s email list is an amateur move that demonstrates a fundamental lack of respect for your own supporters. When someone signs up to hear from your campaign, they’re placing their trust in you with the understanding that you’ll use their contact information responsibly. Handing their email address over to a consultant or another campaign is an unethical betrayal of that trust that reflects poorly on the candidate and their campaign operation.”

That’s according to Josh Nelson, the CEO of Civic Shout and a co-founder of The Juggernaut Project, two companies that help Democratic campaigns and progressive groups grow their opt-in email communities. He’s become a leading advocate in the space, publicly calling out bad actors with the aim of curbing such practices on both sides of the aisle.

But here’s the thing about selling your email list: along with being unethical, it can also be risky.

Which brings us back to Kevin Nicholson.
​

Tracking Your Email Address with Gmail

So most people don’t know this, but Google actually has a simple way to track your email address as it floats around the internet.

Let’s say your email is WisconsinPolitics@gmail.com. When you sign up for an email list, you can add a simple tracking tag to your email. Doing so is extremely easy. Just add a + after your name and a keyword or phrase you want to track. For example: WisconsinPolitics+ScottWalker@gmail.com.

So in the case of Kevin Nicholson, my email doesn’t come to Josh, but to josh+nicholson.

Pro tip: this even works with professional email addresses run via Workplace (or G Suite as it was once called).

So when I signed up for Kevin Nicholson’s email list, I did so using a gmail tracker.

It didn’t take long for me to start getting emails from questionable sources. But while the new senders were questionable, how they got my email address never was.

First it was Sheriff David Clarke. And it was brutal. Like so bad I’ll spare you screenshots. But yeah, it was bad.

Next up was the Wisconsin Conservative Digest. Never heard of them. Wish that was still the case.

They send me massive screeds poorly formatted and… let’s just say I’m not their target demo.

But then a few days ago, I got an email from them that I found interesting. Quite interesting in fact.

While they don’t seem to be outright endorsing him, they published a letter from Tim Michels… who is also running in the Wisconsin Republican gubernatorial primary.

So to clarify: Kevin Nicholson made a quick buck selling my email address… to a group that’s now openly promoting a candidate he’s running against.

You love to see it! 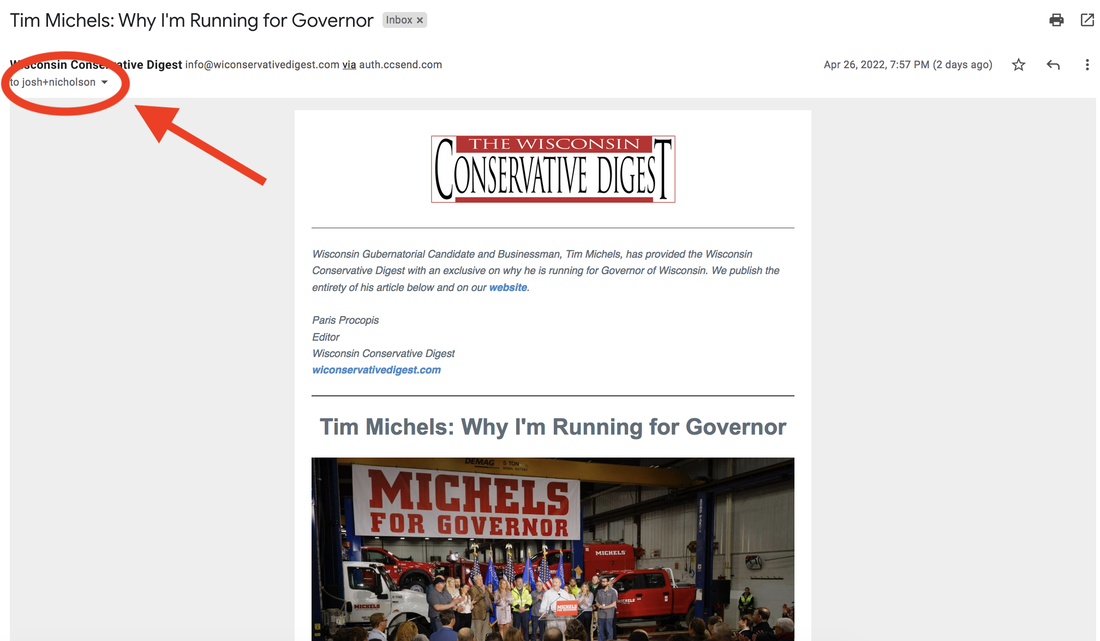 So that’s my cautionary tale for you. Have any of your own to share? Hit me up on Twitter. I can’t get enough of this stuff.

If you are running for office — or know someone who is — my team and I help progressive candidates and campaigns find, hone and tell their stories online.

​Learn more about our work and hit us up today

What Are Vanity URLs and Why Should You Be Using Them?Likes On Social Media Are Free
Scroll to top