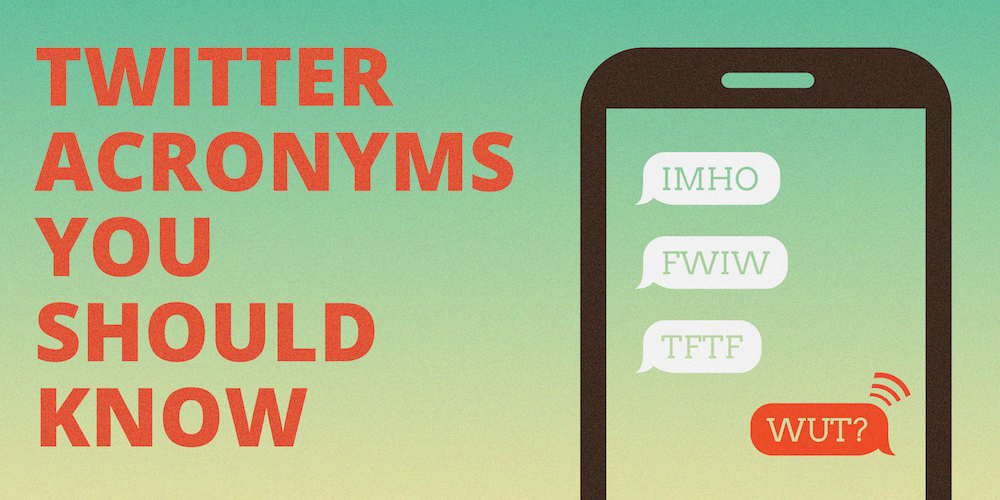 Twitter, and the internet in general, can be an overwhelming place if you don’t speak “the language.” While this list is neither meant to be exhaustive nor ever up-to-date up with an ever progressing set of terminology, these are some acronyms that you should know.Come across any others you aren’t sure about? Google can usually provide the answer pretty quickly. But don’t hesitate to reach out. I’ll be happy to get back to you. NP (No Problem).

Without further ado, here are some Twitter (and general social media) acronyms that you should know:

Someone might say: “I work with celebrities. AMA.” The idea is that they know something—or do/have done something—interesting and they are ready to answer questions. It’s an acronym more typically used on reddit, but it pops up now and then on Twitter.

More private than a tweet. Although, not completely private! Remember Anthony Weiner and his privates? That went live because he thought he was DMing someone, but accidentally tweeted it. Just as important, even if he had done it correctly, someone else would still have had the pic and could have shared it. Good rule of the thumb: if you don’t want it to be public, don’t write it down (and for the love of god don’t take a picture of it!!!).

Not sure if you are open to receive DMs from anyone? Here’s a blog post I wrote on the subject.

If you follow someone you really like, you can give them nice shoutout through the #FF. Example: #FF @ReverbalC for awesome social media advice. 😉

Let’s say you post something on Facebook and a friend sees it and like it. He posts it on Twitter and wants to give you credit. So he would say HT (or H/T) @YourHandle.

Facts vs. Opinions. An important distinction!

This one is important. Some news breaks and you post it online. A few days later, you want to make sure that as many people as possible saw it. Reposting it straight would be a bit of a Twitter faux pas. But if you add ICYMI, you are letting people know that you are re-flagging the story as noteworthy.

This one is less relevant today now that Twitter has changed how we quote tweets. But sometimes you will still see it. Essentially, if you want to quote someone else’s tweet, but need to edit it for length or to fix a typo (NOT to change their meaning), you would add MT. You are letting people know that it was someone else’s tweet — mostly.

Be on the look out for this one before clicking on any links. 😏

If someone says #PT in a tweet, they are letting you know that the current tweet refers to the previous one.

A step up (down?) from LOL (Laughing Out Loud).

Disappointment of the briefest variety.

Share a pic of yourself (or someone/something else) from back in the day on any Thursday and tag it #TBT. It’s a very popular form of Twitter nostalgia. There’s also #FBF (Flash Back Friday). Same idea, different day.

Sometimes I’ll read an article and think it’s great. But I know that most people don’t have time. So I can quote tweet it with a TL;DR and a brief summation. For those who want to read the whole thing, great! For those who don’t have time, they can quickly get the gist and move on.

Any that I missed? Mention them in the comments, drop me a line or tag me online (Twitter or Facebook). In the meantime, HTH (Hope This Helps)!