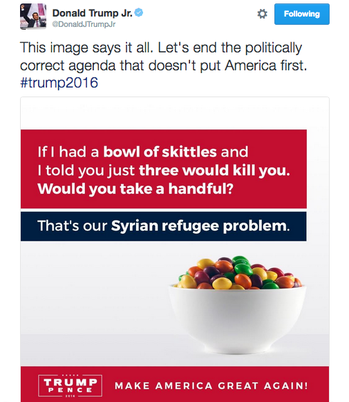 The backlash was quick and it was fierce. A particularly good response (one of thousands) came from Jon Favreau, who used to work for President Obama. 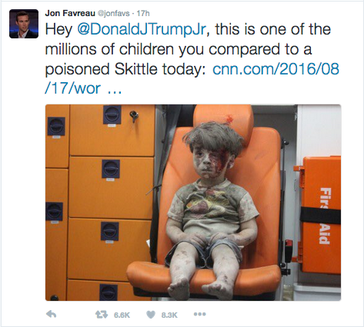 And on the other end of the spectrum, here’s one from @darth:

It’s worth noting that as offensive as Trump Jr.’s tweet was, it wasn’t even an original idea.

When Ben Carson was running for president, he often used a similar analogy to justify his opposition to accepting Syrian refugees, except he substituted Skittles with rabid dogs.

Mike Huckabee, during his run for president, used peanuts. Others have replaced Skittles with M&Ms or grapes.

Former Congressman Joe Walsh—who you might remember as the guy who threatened President Obama in the aftermath of this summer’s shooting in Dallas—was offended by the tweet, but only because he didn’t get an h/t. 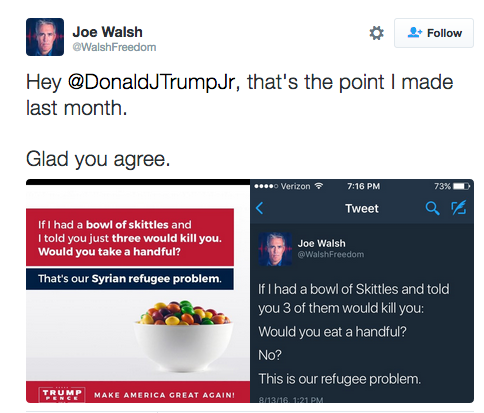 Suffice to say, it’s not a new argument.

Now imagine you are Skittles (the brand), and suddenly—inexplicably—you find yourself trending on social media. What’s your response?

Really think about what you would do. A massive, household name is being equated with poison and refugees and xenophobia. Do you attempt to “capitalize” on the situation, ensuring the world that every Skittle in the bowl is good and poison-free? Do you try to be funny, serious, irreverent, angry… On a situation like this one, you could ask a hundred branding experts, and they would all probably have a different idea.

And yet, Skittles managed a perfect response. Here it is in its entirety:

Skittles are candy. Refugees are people. We don’t feel like it’s an appropriate analogy. We will respectfully refrain from further commentary as anything we say could be misinterpreted as marketing.

In 30 words, they clarified that they are offended by the comparison, that they don’t agree with it, and that they would now be shutting the hell up.

In fact, despite the fact that they are a brand with a vibrant social media presence, their Facebook and Twitter accounts have gone completely radio-silent since this controversy erupted yesterday.

Here is the lesson for brands: don’t see every mention of your brand as an opportunity to raise sales or increase market share. You can’t capitalize on tragedy; trying typically raises your profile in ways you don’t want and associates you with a story which you probably don’t want to be a part of.

It’s so easy to see how this could have gone wrong for Skittles. Instead, they came out the heroes in the story. Or, at the very least, not one of the villains.

Epilogue
The bowl of Skittles in the picture that Trump Jr. tweeted was used without attribution. And much richer than that: the photographer was once a refugee himself!

Want to read more great responses to this awful tweet. Here are 21 you are sure to appreciate. Did you see any others in the Twitterverse that aren’t on this list? Tweet them at us or share them in the comments.