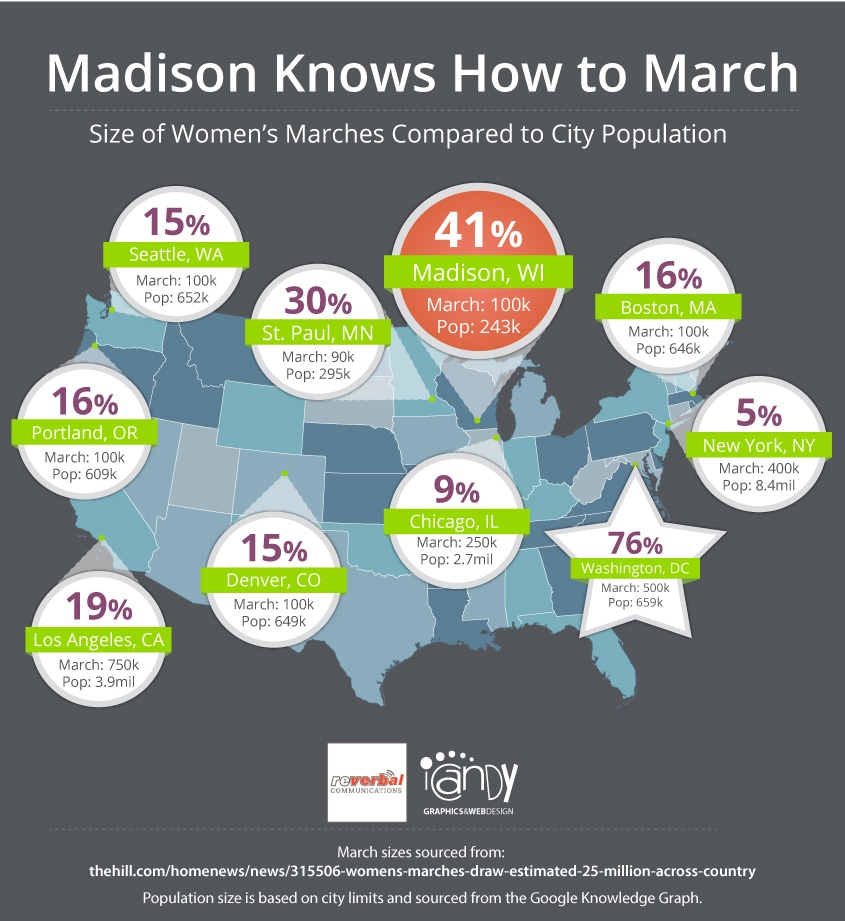 On Friday, Donald Trump was inaugurated as the 45th President of the United States before a crowd of about a quarter of a million people gathered on the National Mall.

The following day, half a million people took to the street’s in our nation’s capital for the #WomensMarch in order to “stand together in solidarity with our partners and children for the protection of our rights, our safety, our health, and our families – recognizing that our vibrant and diverse communities are the strength of our country.”

Along with the central march in Washington, DC, there were another 2.5 million people participating in 600 sister marches world wide.

The largest marches were in Los Angeles (750k), Washington, DC (500k), New York (400k) and Chicago (250k). It is not surprising the biggest crowds were in the three most populous cities and our nation’s capital.

BUT, when we look at the size of the march compared to the city population, rather than the raw numbers by city, things get interesting.

Washington, DC comes out on top, with number of  participants equivalent to 75% of their population. [Before we move forward, let’s break that down: Washington, DC has a population of 659,000 people. They had 500,000 marchers. So the percentage of marchers, as compared to the city’s population, was 500,000/659,000 = 75.87%.] But many people traveled from all over the country to participate in the central march.

Second to DC, the clear winner of marchers by city population was Madison, WI with over 40% turnout!!!

Great work Madison, Wisconsin. Way to represent your values.
Check out some of the great social content from the day at #WomensMarchMadison.

*March sizes sourced from The Hill.
Population size is based on city limits and sourced from the Google Knowledge Graph. 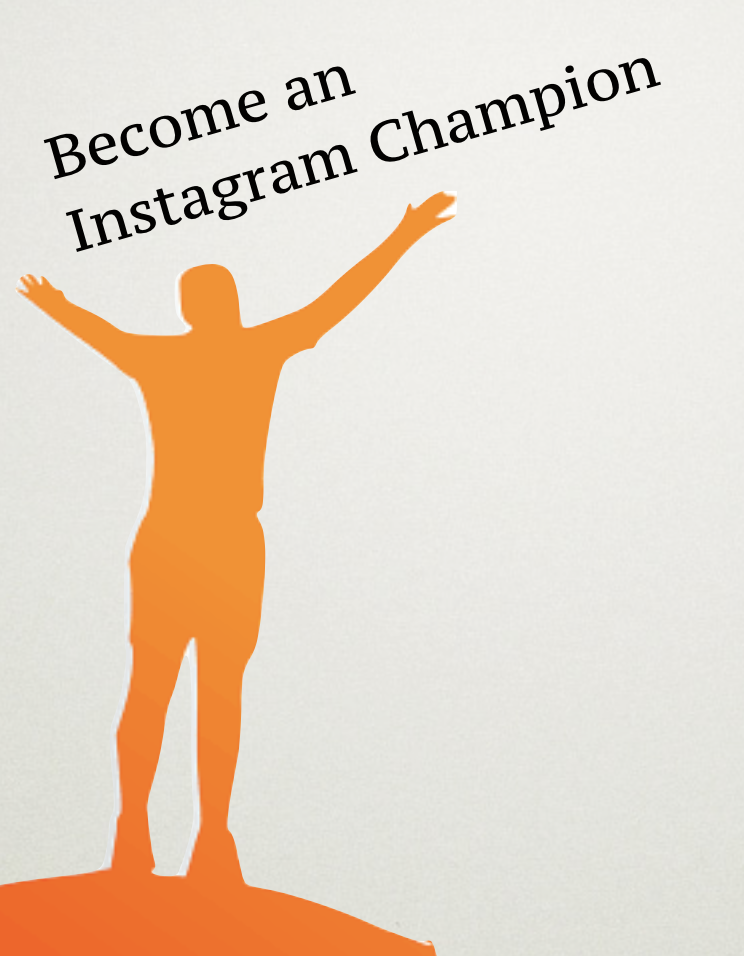 Instagram finished 2016 with a billion monthly active users. 500 million of them are active on a daily basis. Five. Hundred. MILLION!

And they are active. Everyday, users post an average of 95 million posts. And they like over 4 billion posts. (Yes, that’s billions with a “B”.)

Brands are a big part of the fun. And with good reason: according to Instagram’s Advertiser Statistics, HALF of all users follow at least one brand on the platform. Of those, “60% say that they learn about a product or service on the platform, while 75% take action, such as visiting a website, after looking at a post.”

So here’s a simple question: Is your brand making the most of this platform?

Whether this is:
-the first you are hearing about this interesting-sounding platform,
-you have an account but you’re not sure how to get started, or
-you use IG daily, but you just aren’t sure you’re getting everything you can out of it,
the time has come for you to Become an Instagram Champion!

Trainings for you and your team can be conducted on-site or remotely.

I also train people to become Facebook Ninjas, Super Twitterers and more.
Learn more about how we might work together.
​

​WHAT PEOPLE HAVE SAID ABOUT WORKING WITH ME

“Josh is a social media maven who wants to help others improve. I have benefited from Josh’s expertise firsthand, and as a result feel more confident using social media to empower more good in the community. Josh is an effective and patient teacher, responsive, thoughtful and practical.”
-Renee Moe, President & CEO, United Way of Dane County“Josh is a wizard. We just had a three hour training with him and feel like we have more than a clue how to promote our band and stay in touch with music lovers everywhere.”
-Sims Delaney-Potthoff, Mandolinist and Bandleader, Harmonious Wail​Received a few hours of consulting from [Josh] today. Best money I’ve spent in a long, long time.
-Philip Crawford, Manifestly and Political Strategist”My staff and I attended your training… and were absolutely blown away by the presentation and quality of content. To say we took away a ton is a vast understatement! I don’t think I’ve ever been in a training more engaging and insightful, PLUS my team is beaming with motivation and excitement to hit the ground running!Massive THANK YOU, Josh, for your wisdom and expert advice on how to use social media to grow Jenerate Wellness. You’re top-notch!”
-Jen Rudis, Jenerate Wellness