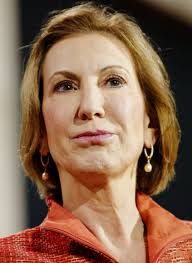 Carly Fiorina, ousted head of HP and defeated 2010 senate candidate, is running for the GOP nomination for President.Things were going very slowly for her throughout the summer. She was relegated to the “kiddie stage” for the first GOP debate. She accepted her placement and the general consensus was that she shined. She began to get noticed for the first time throughout her campaign.

By the second round of debates, she had risen in the polls and she managed to score a big victory by being the only candidate to move up from the kiddie debate to primetime.

She was again widely praised for her performance in debate #2. The highlight of the evening for her was when she took on Planned Parenthood over some tapes that had just been released.  She made an impassioned pro-life plea and quickly shot up in the polls.

The problem was, the highlight was based on factually incorrect information. She claimed that the videos showed things that didn’t exist—objectively didn’t exist . No media bias, no difference of opinions, she simply created a scene and spoke about it in great detail (or possibly, confused a different video with the one she was referencing).

While her rise was meteoric, her fall was pretty much just as quick. She built her reputation on something verifiably false. Every story that followed was not about her or her ideas, but about that falsehood.

It was a good play based on a shoddy foundation and she ultimately fell right through the bottom. Post debate, she was polling at 15%, putting her in second place. Today, heading into the third GOP debate, she is at 4%.

Her Truthiness Problem is Bigger Than That One Debate Statement
Fiorina has a general problem with telling the truth, even when the fact-checkers have done their fact-checking. Mother Jones just published a story called “Carly Fiorina’s Fact-Defying Stump Speech,” outlining all of the outright falsehoods she has made a regular part of her speeches.

The problem is, every enticing story or juicy statistic she tells is sure to impress the people in the room. But candidates, like businesses, organizations or anyone else, can no longer live just in the room. The press is listening, social media is watching and the fact-checkers never sleep.

While making up facts and statistics may help a candidate—or brand—get noticed, the story will ultimately be not about the candidate but about the falsehoods. And that is always a recipe for disaster.

It is far better to win over voters—or customers/supporters/fans—slowly with honesty, than quickly without merit. Their support may be harder to gain, but it will be worth something once you have earned it.

Tonight is GOP debate #3—we’ll see if Fiorina has learned her lesson. Based on her current stump speech, I’m thinking the answer is no.

Happy Back to the Future DayIf This, Then That
Scroll to top